While I admit to the yoga pant addiction and love affair with sporting goods stores, I’m not particularly skilled or accomplished. I consider myself a TRY-athlete.

There are people out there, the myths and legends of small towns, who are born to be athletes. Girls and boys who from day one were meant to put on a uniform and kick some ass. Universities scout them, coaches name plays after them, trophies line their bedroom walls. And then there’s kids like me.

Filled with fear of getting picked last, perpetually clumsy, and generally disgusted with the image in the mirror.

Many who know me, especially in the last 7 years and have seen me complete about a dozen half marathons, might categorize me as fitness focused. They would say I’m passionate about health, that I wear yoga pants almost exclusively, and am obsessed with REI. They may even have the illusion that I am naturally lean and possess some athletic prowess. While I admit to the yoga pant addiction and love affair with sporting goods stores, I’m not particularly skilled or accomplished. I consider myself a TRY-athlete. Not the urban dictionary definition – “I’m a tryathlete, I always try to get to out of the house to train, but there are too many distractions in my fridge” (well, this rings true too.)

TRY-athlete – meaning, I’m not a runner, but I’ll get out there and try to run. I’ll try to bike, swim, lift heavy objects, or bend myself in twisty yoga ways. Never winning, but always finishing, I have a willingness to show up and do my best. Those who knew me growing up know that I was not born with this mindset. Especially if you met me as an angsty, eccentric goth-kid wannabe. What I didn’t know then, that I understand now, is the magic of exercise. The pain-killing, self-esteem boosting, anti-depressant super-powers of “engaging in physical activity to sustain or improve health and wellness”. Unfortunately, I allowed self judgment and fear of competition and failure distract me from the benefits. 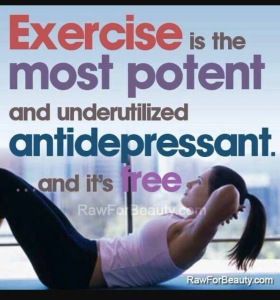 I’ve always been the girl with her nose in a book. Walking home from elementary school I would barely peel my eyes off the page to look up at a crosswalk, or to acknowledge kids riding past in the bus yelling “Hey! Bookworm!!” These days, you’ll find me with my face glued to my phone, where I download dozens of books every month. If you’d have told me as an awkward adolescent that someday I’d own more athletic wear than jeans, that I wouldn’t think twice about buying $30 running socks, and that my living room would often look like REI threw up gear all over it, I’d have rolled my eyes. I would’ve smirked, said “gag me with a spoon”, and turned right back to my book.

My family encouraged sports, especially in my brothers, but we weren’t a family that rode bikes or signed up for runs together. We watched the Seahawks and Mariners, and my parents were involved and enthusiastic with any after school activity we joined. We would never be classified as an athletic, sporty family – but I had my fair share of misadventures in a variety of sporty uniforms.

When my brothers were playing T-ball, I was enrolled in ballet. I adored my tutu and charming pink shoes, but lacked talent and drive. During the recital I panicked, and basically blacking out, forgot every move. Twirling diagonally across the polished wood floor towards the audience, I faked the routine. Pirouetting, plie-ing, I wished it would end or that I would die. Soon after, I quit dance, but my ballerina dreams weren’t yet completely crushed…at about 13 I had the excellent idea that I still had a chance at dancing stardom.

Like many young girls, being a 13 year old woman child was thoroughly confusing. Testing out hobbies, I tried to fit in and find myself. Two important things I realized: I really wanted to be a “cool girl”, and the “cool girls” all did dance. Back to ballet I went – right into beginner classes with elementary aged children. The girls whom I admired had been dancing for years together, their recital pictures displayed along the wall in the studio entrance way. To my coveting eyes, they appeared elegant, sensual, and expert in their toe shoes and leotards with gauzy skirts. My plan was to practice for a few months, sharpen my skills at the barre and wa-la! I’d arabesque right into Julliard.

The dance teacher told me I had strong, dancer’s thighs and I swooned with pride. Our recital costumes were gorgeous and edgy, as was the music we practiced to. This was not something I would ever be allowed to listen to at home, but in the dance studio I could get into it unashamed. Moving my hips in a very grown up way, wearing tight flashy spandex that showed off my tomboy body. These outfits still live in a box in my garage, next to my first pair tiny pink ballet shoes labeled “L” and “R” in permanent marker, worn when I was just learning right from left. I wanted my picture on the wall in that studio more than anything I’d ever dreamed – that is, until dancing became too hard and I quit. Instead of feeling proud for trying and looking forward to improving, I would silently judge myself. In the dressing room, I would scan my body in the mirror, finding invisible flaws, comparing my chest and legs to the other girls’ beauty. My eyes would tear up, watching girls my age head into one studio while I was relegated to the little kids’ class. Embarrassed, self critical, I told my mom I was done. Thanks for your time, money and support, but no thanks. I am not good enough, therefore I will not go.

Quitting was my style…Piano lessons, dance, watercolor painting, sewing a skirt in Home Ec.  If I wasn’t perfect immediately, then forget it. I wanted an A+, blue ribbon or nothing at all. What was the point of putting in the hard work just to humiliate myself for a runner’s up award? I was incapable of loving myself where I was at, couldn’t grasp the concept of “progress not perfection”. Unwilling to accept myself as anything other than perfect, and unwilling to take the time to practice and grow.

Long before the tweenage dance experiment, I’d played a season of “Rookies” baseball. Innocent yet of the severe self critic I would cultivate, I enjoyed playing ball. I remember what it felt like to stand at bat knowing I’d strike out again, or waiting in the outfield, scared the ball would come my way, and scared that it never would. There was competition even at that age, but not so much between the kids. It was the parents that got too loud, too aggressive. There were meetings about this, the coaches urging the parents to chill out and let the kids play. It was no secret I sucked at baseball, the only girl involved, but I loved being part of the team. Perhaps a little too much…maybe a bit too excited to show up and see the boys, at least for my parents’ taste. Perhaps I commented one too many times on how cute the 9 year old boys were in their uniforms. It could have been that the boys were distracted, ogling me from the outfield, or more likely, just disgusted to have a girl on the team. Needless to say, my baseball career was cut short after 1 season.

Another great idea emerged…my best girlfriend and I schemed to convince our parents that we should play on the local parks and rec football team. Real helmets, real tackling, REAL sports. We are women, hear us roar… If our brothers can play, then so can we. In hindsight, my desire to be included would never have stood up to my utter lack of skill. One practice on the field, and I’m sure I’d tuck my tail and head home. But I wanted the chance to TRY! To be told “You can do anything you put your mind to”. Or even “Knock yourself out, don’t come crying when you’re hurt”. Instead the answer was “No. You’ll injure your uterus and risk infertility.” “The boys will tackle you just to grope you.”

We protested “My uterus, my business!” “What about the boys’ fertility!?!?” But I was no Gloria Steinem and the summer ended, along with my yearning to wear a numbered jersey and shoulder pads. I found other areas in life to rebel, and my uterus did indeed remain sufficiently intact.

In middle school I gave a final go at organized sports. Safely surrounded by private school Christian girls, no direct threat to my fertility or boys making excuses to tackle me, I joined the volleyball team. It felt good, suiting up in knee pads and uniform of T-shirt and modest shorts (private CHRISTIAN school- no cute booty shorts here). Though I didn’t make any lifelong friends, and continued to feel inherently “less than” the other girls (I was the youngest, and all the older girls were already besties), I felt included, whether being cheered on if I scored, or cheered up when I faulted. It was a very small school, 4 kids total in my 7th grade class. The attention on game day, and traveling in the team van for tournaments made me feel part of something important.

Just in time to get comfortable as a teammate, I was moved back to public school for 8th grade. Organized sports in the tiny private school were a secure, sheltered place to play. It’s likely that I was only allowed on the squad as there were barely enough students to form one. Comparatively, public Junior High was a shock – swarming masses of scary students, the terror of tryouts, the competition of cliques.

Unsure of my place on the bustling campus, I felt vulnerable and exposed in a gym or on the field. Having attempted a variety of athletics and finding myself neither naturally gifted nor inspired to put forth effort, I returned to the comforting, solitary activity of reading. A world free from competition, sweat, coaches or teammates. No one to judge my beauty, pace or form. There was no pressure to challenge myself, and I escaped to a safe place in which I couldn’t fail.