Prior to meeting any real life Romeos, I planned my initial strategy: No spilling of sobriety beans until we met in person. As you know from my prior post, I agonized over this. When, if, and how much to tell a first date about my life in recovery? I want to give myself a fighting chance – so if they get the opportunity first to see my sweet PollyAnna smile, maybe my felonious past won’t be such a bitter pill to swallow? One can only hope.

The look on a guy’s face is priceless when the inevitable happens. My beverage order of water, ice tea, or tonic/lime brings on the exclamation “What??!!!? You don’t drink? At all???!!” Their face contorts into a cross between disbelief, curiosity, admiration and distaste. I can see the wheels turning as they wonder “Is she crazy, or really cool? Should I kiss her or should I run? Maybe I shouldn’t drink either?” Only once so far, did the guy order a root beer in solidarity with me. He was adorable, and very short, and had a 7 year old son. Alas, he was never to be seen again.

The following are my go-to responses, alternating depending on circumstance:

The Excuse – “I’m on a health kick” “Giving my liver a break” “I gave it up for lent” (careful, this only works if the calendar coincides!)

The Ambiguous Answer – “That’s a great conversation for date #3, don’t you think?” The fear of what this answer alludes to eliminates date #3 from ever happening. Unless morbid curiosity gets the best of them, or they’re a total drama hound. (I use this one a lot. Face it, date #3 almost never happens anyway – I can tell the minute I meet them whether I want to see them again. Or at all.)

The Full Monty – Give ’em a show! “I’m an addict and alcoholic. You don’t want to see what happens if I start slugging back the beers! Since I’m in a probation program now, I’ve put all that negativity behind me….Really it’s a good thing….I’m totally trustworthy. I get pee tested twice a month! Want to grab coffee and hit up a 12 step meeting?”

So far, I haven’t gone “full monty” on a first date, but you’ll be the first to know how it goes when I do.

I write this blog under my own name….I’m sober out loud on all social media. I’ve spoken in front of hundreds of nurses and have written articles at work on healthcare providers with addiction. But when it comes to my fragile ego, and the desire for acceptance in dating and intimacy, I still have a lot of fear.

Stigma and shame are cunning adversaries. They creep in at just the right time, reminding me of my faults and making me question my own worth.

And yet. I cannot hide from my life. This is ME. Addiction is a part of the tapestry of my being. I don’t want to start a relationship under false pretenses, I want authenticity, vulnerability, genuine connection.

And so, after using the “if I don’t tell them they’ll never know” approach for awhile, I’m satisfied that it’s not the most intelligent gameplan. The majority of pre-date conversations never evolve into first date fruition, but it just might be in our best interest to present the juicy stuff up front. Officially it’s none of their business at this early stage, but if they’re not going to be accepting….if it’s going to be an insurmountable hurdle…..doesn’t it make sense to show all our cards and let the rest take its course?

Everyone has dating deal breakers- traits or characteristics that are required or forbidden. For example, my partner in crime must ski or snowboard; must not want more children. Why would I instigate a conversation, much less invest in a date with someone who refuses to play in the snow or who’s heart is set on starting a family? The same goes for my date…suppose he’s been heartbroken by a loved one’s addiction, and is sure that he’ll never allow it back into his life? I’d rather know right away and respect his wishes. Before he inevitably falls madly in love with me. Because of course they all do! 😂

Another indisputable attribute in my would-be beau….HE MUST LOVE DOGS. Allow them in the bed, share food off his plate, dog is man’s best friend for life kind of love. My VERY FIRST first date could have been totally eliminated if that had been made clear, before we’d wasted an evening of our lives. (Really, how could you not love a face like this??) 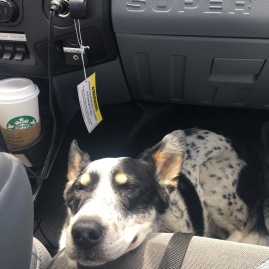 First date #1 and I met in Seattle “for drinks” – iced tea for me and Moscow mule(s) for him. As we ordered, he looked at me with before mentioned face contortion,  and one eyebrow raised…..”REALLY?!?! I thought we were meeting for drinks?” “We did!” I laughed “I’m having tea. I don’t drink alcohol.” The eyebrow lifted higher “You NEVER drink? Like NEVER?!”

I took a deep breath and that’s where I concocted the “Ambiguous Answer“…. “I have before, but I don’t drink now. That’s probably a conversation for date #3″. Surprisingly, he didn’t seem put off by this. In fact, within the first 20 minutes he’d made a case for himself that this date was a disaster. A few of his fatal mistakes: 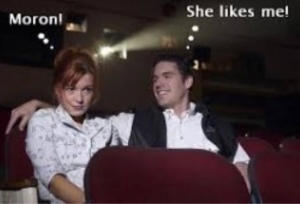 The night concluded with a dog walk around Green Lake – not because I wanted to prolong our time together, but because I owed Cassie at least that much and it was dark, so Eager Eddy was invited along for the illusion of safety.  Mr. Not So Smooth barely greeted Cassie. She cocked an ear at him, and he explained that he owns a dog, but doesn’t really like him. He went on to say he is a terrible “dog dad”. The poor pup lives in the garage, isn’t allowed in the house – much less on the couch, and isn’t taken on walks, to the park, or anywhere for that matter. “I really just need to give him away. My other one died at 8 years old, I’m not even sure how.” My stomach turned. Date over! He needed a date with animal protection, not with me. At that point, I seriously felt like I could use a drink!

A little alcohol may have helped numb me as I suffered through his company …..on the other hand, a little alcohol may really have numbed me, and I wouldn’t have realized I was miserable… I may have even believed I was enjoying myself. Imagine how differently that could have gone! Actually, don’t. Yuck. The lack of beer goggles has likely saved me from more than a few unsavory situations.

Ultimately, it wasn’t a complete waste of time, even if I did leave feeling repulsed. A few lessons were beginning to take shape:

As I drove myself home, the whole while reassuring Cassie that we would never date another bad dog dad again, a small bloom of optimism began materialized inside of me. I felt relieved, a bit like I had ripped off the ouchy part of one side of a band-aid. I knew that I’d played it safe though. There was a lot more band aid to rip off. Seriously, I didn’t give a sh#$* what this guy thought of me and my addiction. Which meant I had yet to come clean with the whole sober saga when a geniune connection was at stake.

Tiffany! you say. Silly Girl!! Why not just date someone else in recovery, and save yourself all of this heartache and game playing in the first place?!<

Dear friends- of course!! That’s exactly what I tried next.

Stay tuned for the guy who says the drive wasn’t worth his time….the drive to meet me that is…

4 thoughts on “To Tell or Not to Tell…Experiment #1”