I thought “We” – the recovering – would treat each other with reverence. Like soldiers in battle, we should be allies and advocates. Truth is – we’re just humans experiencing the human condition. We’re egos with legs, walking around, figuring it out at our own pace.

Retracing the steps of my last date debacle, I considered what went wrong. Jumping in blindly, I met the first guy who asked, and didn’t establish deal-breakers or core values. Determined not to end up with another “bad dog dad”, my new dating profile exclaimed: “Must love dogs & winter sports. No heavy drinking. No hookups.” 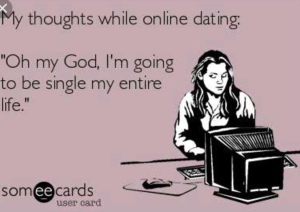 I wanted to at least try dating someone who doesn’t drink; take the pressure off the whole “to tell or not to tell” scenario and see if it made a difference. It could be refreshing…He would be rigorously honest, spend time pursuing self improvement, and be conscious of his defects. Scanning the profiles of available young gentleman, I saw the word “Sober” beneath the photo of a dark haired, tall-enough man who was ‘potentially-good-looking-but-pics-are-too-far-away-to-tell’. I swiped; we matched. We’ll call him Lyle.

Lyle is 10 years my junior. My girlfriends encouraged me, and after conceding that 45 year olds I’ve dated may as well have been 25, I relaxed my minimum age requirement. Lyle and I agreed to meet that Sunday for brunch, a hike with Cassie, then cribbage back at my place. That’s literally CRIBBAGE the card game – not an insinuation of anything else!

Lyle had worked on Wall Street prior to moving to Seattle. He seemed sort of funny and smart, which helped me feel comfortable with our age difference. Mentioning to him that most guys aren’t willing to drive from Seattle to meet me, he countered “I’d take any excuse to get out of the city! I’m sure its worth the drive.”

“Of course it is!” I texted “There’s lots of reasons to drive an hour for a date.” “Oh yeah?” He said “What could that be?” “Well Lyle… besides a guy just wanting to get naked with a woman, there’s lot of reasons. Great company, walking a dog along the river, or a little PG make out session is totally worth 60 miles.” He agreed, and the date was set. I looked forward to Sunday with tentative optimism.

Cassie the dog and I met Lyle outside a Cafe, but as he approached, the excited butterflies stopped flapping around my stomach and settled down, disillusioned. “We flapped around for him?” said the butterflies. “Meh. Wake us up for the next one.”

Lyle was “cute”, but skinnier than his blurry pictures indicated. He lacked a manly posture and had no charisma to make up for it. He greeted me with a low energy that made him seem indifferent and I had the thought I’ve had at the start of too many dates “There are literally so many other things I could be doing today. Do any of the guys look like their photo? Where’s his personality? You’re here Tiff – put on your happy face and give it a chance. Beats sitting at home cutting your toenails.”. (Sorry Lyle, but it’s true. I knew 5 seconds into meeting you that I had no desire to see you shirtless or find out how you kiss. Is that extra rude? Or just self aware? It’s not like I told him to his face!)

Our conversation picked up over breakfast though, and my attitude improved as Lyle talked. Sober off heroin for 2 years, sharing about his recovery made him slightly more attractive. His story was relatable, and he seemed to listen to mine without judgment. I felt camaraderie, if not any warm fuzzies down below.

The chemistry just never developed any further. As we walked to a viewpoint overlooking the Valley, he never reached for my hand or attempted a shy first kiss. “He’s not into me” I thought. “Maybe I’m too old after all.” But that was OK! I made a sober friend! I adjusted my thinking and enjoyed it for what it was.

The “date” continued at my place, where he tried to teach me cribbage strategy. My brain had been awake for 36hrs – I’d worked the night before – and I was getting fuzzy. After the 2nd round of cards, I was ready for bed. Alone.

“You’re kicking me out?” He seemed miffed, but I was too tired to question it.

After securing (platonic?) plans to check out a sober meeting together, I smiled sincerely. So It wasn’t a love match? It still felt like success -anything above epic failure this new to dating feels like success.

Then I blew it with a question.

“So Lyle, was it worth it after all? Driving 60 miles to hang out with me?”

He had to be kidding.

“Really? What do you mean?”

“I just thought I was going to get laid.”

“Yeah…. after your text about making it worth my drive…I just thought that’s what would happen….”

Wait a minute….MY TEXT?!?!?! I re-read our messages. Nowhere did I say “if you drive to my house I will F you.” He never asked for sex, he didn’t flirt, he didn’t even compliment me! At what point was this “getting laid” supposed to occur?

He left and I shocked myself by bursting into tears. Not because I’d fallen in love, but I felt so Fing STUPID. Sober people should have a mutual understanding! I’d spent all day thinking he had decided I was too old. Or that maybe we would just start out slow, spend time as friends and see where it goes. You know, like normal people. Dating.

But no. He was  just hoping to GET LAID. 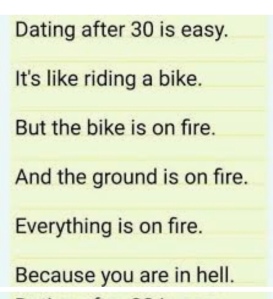 It had been a long time since I’d felt so used. Is this dating? Am I now an object to be “laid”? It wasn’t the story I was hoping to giggle about later with my girlfriends. Only a few dates in to singledom and I sensed a theme. My life is not a TV show. I can’t conjure up a random 27 year old and expect him to turn my Sunday into a hot episode of “Girlfriend’s Guide to Divorce”.

Crying ugly tears of self doubt and mortificaiton, I sent Lyle advice via text (I didn’t mention the tears). “Next time, consider flowers, compliments, kissing- anything to let a girl know you’re the least bit interested, before acting pissed you didn’t have sex. Maybe even broach the subject beforehand so everyone is clear. Try this- ‘I’m going to get laid right? Like tonight? Our first date?’ You would have saved the gas money, and I could have gone for a pedicure.”

He stammered some lame excuse about being timid and young, but wouldn’t give up blaming me for putting the idea in his head. I guess he read the word “naked” and had a junior high hard on from that moment forward. I blocked his number and consoled myself with chocolate.

I thought “We” – the recovering – would treat each other with reverence. Like soldiers in battle, we should be allies and advocates. Truth is – we’re just humans experiencing the human condition. We’re egos with legs, walking around, figuring it out at our own pace.

Here’s a secret: a teeny part of me was flattered. Maybe I shouldn’t admit that, but it’s not like I can embarrass myself more here. After the humiliation hangover, I had to look for a thin silver lining…

He drove 60 miles, to be with me. We spent all day together and he was still disappointed that he didn’t get naked with me – a 36 year old Mom and former addict. I’m just going to pretend that says great things about me – not that he was desperate, undiscriminating or going through a cold spell.

I must be so flawlessly attractive and alluring, his disappointment overwhelmed him and he had no other choice than to blurt out the words he did. Like I said, a very thin silver lining. It hardly absolves the facts.

Maybe Lyle learned from our date gone wrong and his relationship future was altered for the best? I certainly received an education. My naive optimism doesn’t change the fact that online dating is for hookups, and it’s up to me to be discerning and cautious if I’m going to participate. I need to be protective of my fragile emotions, not sign up to date strangers who are licking their own breakup wounds, then cry like a baby when it goes awry. (To my credit, my profile did specify “no hookups” and I MEANT it. Trust me, the guy will KNOW. There will be no question of “is this platonic, is there chemistry?” It will be OBVIOUS.)

The legitimate silver lining is the lesson learned. “You’re fragile. Take care of yourself”. There’s a reason we’re advised to avoid dating while healing from major life challenges. We’re vulnerable, our armor is chipped and we’re not as qualified to engage in reckless behavior.  This is probably where my ego was injured most – not that dumb Lyle was using me for sex, but that I might be wrong, thinking I was healthy enough to handle dating. Thinking I could just put a band-aid on my wounds and jump back on the horse, without assessing the source of bleeding. It took me awhile to come to that conclusion – like just until this moment right now. I’m not one to learn a lesson easily, and certainly not with just one try.

I backed off for a minute – just long enough to recover from dating the guy in recovery. But I was bound to try again…and that’s how I encountered “Dan”, the antithesis to Lyle. And my sober story became my escape route- in this case, to save poor Dan from me.

Trying to keep the silver lining in view…..